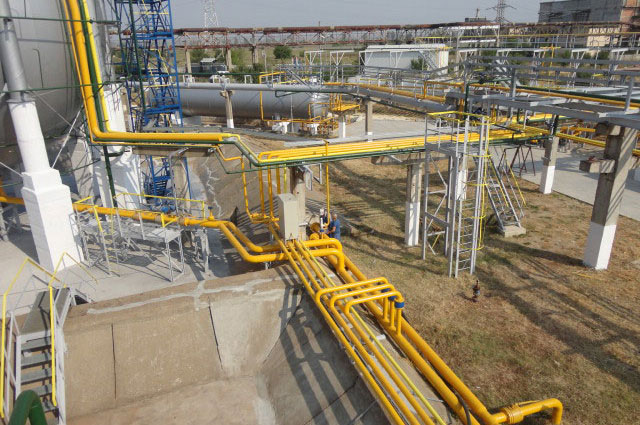 One of the first and main businesses of BULMARKET DM Ltd is the propane-butane (LPG) trade, which we have been developing since 1997. Gradually the company became one of the leaders at the market in Bulgaria and the region. We have created a good image of a desirable and correct partner in the industry and we have proven authority to be a reliable supplier. We annually trade with quantities about 150 000 tons of LPG, which we mainly realize in Bulgaria, Romania, Macedonia, Greece and Serbia. Our supplies are mainly from Russia, Kazakhstan and Romania.

The company's assets in this business include four own LPG handling terminals located in Bulgaria and Romania, more than 150 railway and auto tanks (own and leased).

Terminals in Romania:
Strategic for us, in terms of location, is our terminal for LPG in Galati (Romania). It is located on an area of 14 400 m² with a Russian (wide) and European railways (narrow) access, with a pier on the Danube, where tankers can be accepted with a draft of up to 8 meters.

The LPG terminal has available capacities of 1000 m³ and has the possibility to handle 10 Russian and 10 European tanks simultaneously. The daily processing capacity is 1000 tons of LPG. It is located in a free economic zone under a special customs procedure suitable for imports from third countries.

The terminal in Giurgiu (Romania) is located on an area of 30 000 m², with a capacity of 2200 m³. The terminal capabilities include the simultaneous handling of 5 railway and two tank vehicles. The daily processing capacity is 500 tons of LPG.

Terminals in Bulgaria:
BULMARKET DM Ltd is the owner of a diesel and LPG handling and storage terminal in town of Byala (Ruse District). The facility is located on an area of 25 000 m² and has diesel capacity of 8300 m³ and LPG capacity of 850 m³. The base is registered as tax and licensed warehouse for the storage of wartime stocks under the European legislation. The facility has the capability to process railway and auto tanks with a capacity of 200 tons of LPG and 300 tons of diesel fuel for period of 24 hours.

The company has a terminal for handling and storage of LPG in the city of Plovdiv. The facility has a capacity of 400 m³ (4 x 100 m³), with the possibility of simultaneous unloading of 2 railway tank cars, elevated road for loading of 2 tank trucks, electronic vehicles and railway weigh scales with a daily capacity of 200 tons.